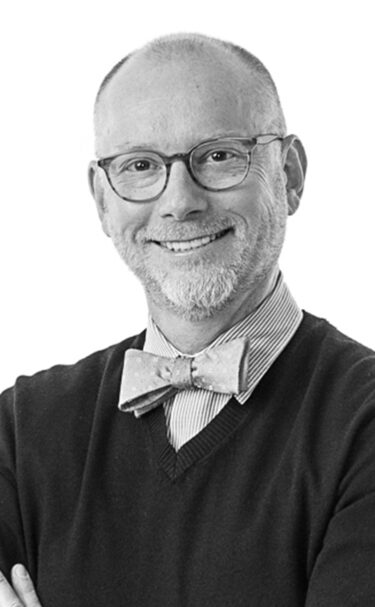 “It’s fulfilling to open doors; the same way doors have opened for me.”

When Rob joined RATIO in 1992, the opportunity to learn, grow and lead propelled him. Throughout his career, he has been relentless in the pursuit of design excellence, inspiring team members to be collaborative and creative, and to speak up and be heard.

Rob is passionate about providing authentic facility planning and design leadership that inspires a meaningful higher education experience for students and faculty. His current work includes the $84-million renovation and expansion of the mid-century-modern Communications Building at Southern Illinois University in Carbondale, a building in which Rob attended classes as his own college career began.

A mentor and coach to RATIO’s next generation of leaders and designers, he’s also a steadfast seller-doer who enjoys rolling up his sleeves—directly engaging clients and campus leaders in the creative process. This is exemplified in the LiveDesignsm process—a technology-enabled collaborative design approach Proctor has pioneered at RATIO to engage clients in new design possibilities, building trust and lasting relationships along the way.

Rob has been an industry leader with AIA Indianapolis, including recent tenure as the organization’s president and as founding chair of its formal black-tie Gala for Design Excellence. He’s always moving and creating—you’ll often find him shooting hoops in his driveway or painting with oils in the studio over his garage, and spending time with his wife Dusty, their twin daughters, and grandchildren.